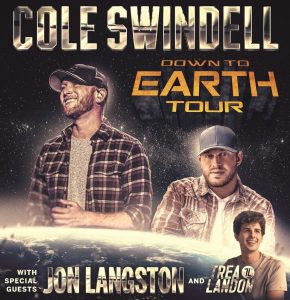 Cole Swindell – Down To Earth Tour concert is scheduled for 7:00 p.m., October 23, 2020 at 7 p.m. at the Hartman Arena with special guests Jon Langston and Trea Landon.

Since he launched his career in 2014, the Warner Music Nashville recording artist has been on some of the biggest tours with some of the biggest superstars in country music including Luke Bryan, Kenny Chesney, Jason Aldean, Florida Georgia Line and Dierks Bentley. The Georgia native first headlined in 2018 with his Reason To Drink Tour and co-headlined the Reason To Drink….Another Tour with Dustin Lynch.

The Georgia native released “Single Saturday Night” for his fans last month to give them new music after he had to pause his headlining Down To Earth Tour and come off the road amidst the current COVID19 crisis. The fans, led by his core Down Home Crew, single-handedly propelled “Single Saturday Night” to No. 7 on the all-genre iTunes chart during its week of release, even without country radio airplay. The groundswell of support to the song was so overwhelming, enormous and positive, the song will officially go for adds at country radio on Monday, June 29.