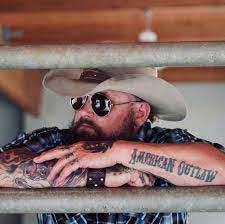 Sometimes the best feel-good music is born from pain. Country music’s rebellious sensation Creed Fisher knows it well, tracing his musical, and personal evolution back to a very unlikely, yet specific point of origin – a little blue house. No, it’s not a metaphor, but a real place, and one decorated by hard times and a few bad memories. “It’s starting from rock bottom,” he says of the symbolism. “That’s what the blue house represents in my mind.” While the ghosts of that dark period are something he’ll never forget, Fisher didn’t let his energy get trapped in the past, instead choosing to recognize, process and move forward. All of it served him well in overcoming life’s little kicks in the ass, and along the way, delivering albums full of asskicking good times and chart-topping hits.

Influenced heavily by the wisdom of his grandfather and the musical tastes of his parents (from classic country to hard rock, George Straight to Ted Nugent), Creed Fisher’s childhood dream was to play music, but, as he asserts – “Life got in the way. I started writing songs just for therapy, to get things off my chest,” he says of the cathartic beginnings. “My music started in a dark place but it developed from there.” Reflecting on an unconventional entrance into the music business, he says “The odds were always against me.” From the get-go, Fisher’s maturity, attitude and a blue collar background didn’t parlay easily into a scene largely ruled by young people, where social networking protocol was the law.

A limited number of table reservations are available for the Creed Fisher concert by calling 316-722-4201 or in person at The Cotillion. Concessions and full bars open! Also featuring local favorites Nancy’s A-Maize-N Sandwich Booth.