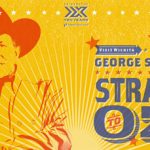 George Strait concert is set for 8:00 p.m. on January 24, 2020 at the INTRUST Bank Arena with special guest Asleep At The Wheel.

Visit Wichita Presents Strait To Oz will be one of Strait’s rare live performances in 2020.

George Harvey Strait Sr. is an American country music singer, songwriter, actor, and music producer. George Strait is known as the “King of Country” and is considered one of the most influential and popular recording artists of all time. He is known for his neotraditionalist country style, cowboy look, and being one of the first and main country artists to bring country music back to its roots and away from the pop country era in the 1980s.

Strait has sold more than 100 million records worldwide, making him one of the best-selling music artists of all time. His certifications from the RIAA include 13 multi-platinum, 33 platinum, and 38 gold albums. His best-selling album is Pure Country (1992), which sold 6 million (6× platinum). His highest certified album is Strait Out of the Box (1995), which sold 2 million copies (8× Platinum due to being a box set with four CDs). According to the RIAA, Strait is the 12th best-selling album recording artist in the United States overall.

The Hotel at WaterWalk offers 88 beautifully spacious suites, each equipped with outstanding amenities expected at a luxury hotel, delivered with contemporary style and beauty.