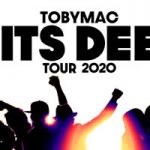 With more than 12 million units in career sales and a whopping seven GRAMMY® Awards, TobyMac’s career continues on the fast track. His 2015 RIAA Certified Gold studio album, THIS IS NOT A TEST garnered a GRAMMY® Award and Billboard Music Award nomination on top of debuting at No. 4 on the Billboard Top 200.

Tickets from original March date are valid for new date. If unable to attend new date, a refund may be obtained from your original point of purchase through May 31.

TobyMac is a Christian hip hop recording artist, music producer, songwriter and author. He was first known for being a member of the Christian vocal trio DC Talk, staying with them from 1987 until they went on hiatus in 2000. He has since continued a successful solo career with the release of seven studio albums and has charted 20 solo singles on Billboard‘s Christian Songs list.

Between DC Talk and his own solo career, he has sold more than 10 million albums and won seven Grammy Awards.