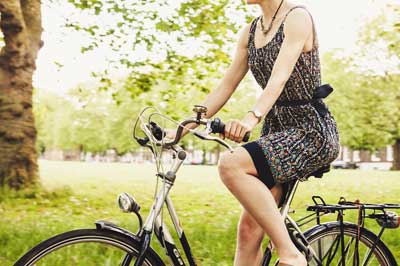 Wichita has more than 100 miles of on-street bicycle paths and 26 miles of off-street paths along some of the more scenic areas of the city.

Maps are available from the Park Department office in City Hall.

It’s legal to ride a bicycle on a sidewalk except in the central business district. A bicyclist on a sidewalk or a crosswalk must yield the right-of-way to pedestrians and give an audible signal before passing a pedestrian.

Downtown Bicycle Path
Along with the river path system, it connects the Arkansas River path to the central business district along Central Avenue.

Sedgwick County Park
The 4.5 miles of paths run through wooded areas, grassy expanses and along the lakes. This 6-foot wide asphalt path connects with the city bike path along 21st. St.

Canal Hike and Bike Trail
A six-mile path underneath and along the I-135 Canal Route between 17th. St. N. and Stafford (just north of Pawnee)..

On-Street Bike Routes
These specially selected routes are on low traffic streets and marked by signs or by paint on the street.

The Haysville Hike and Bike Trail is 4 1/2 miles long. The trail runs along grassy areas and passed several parks. It runs from Freeman to Timberlane and can be accessed on Grand Ave.

Emery Park BMX (Bicycle Motorcross) track
Located in Emery Park 1/2 mile east of Hydraulic on MacArthur. Emery Park BMX provides competitive BMX racing for both boys and girls from ages 5 and up. BMX racing is an individual sport and is designed to build self confidence and self esteem in anyone who particpates. Races are organized according to age group and skill levels, so everyone gets the opportunity to compete on a fair and competitive basis. Even beginning riders have the chance to race safely with other new riders.