Backstreet Boys concert is rescheduled for 7:30 p.m. on September 13, 2022 at the INTRUST Bank Arena. 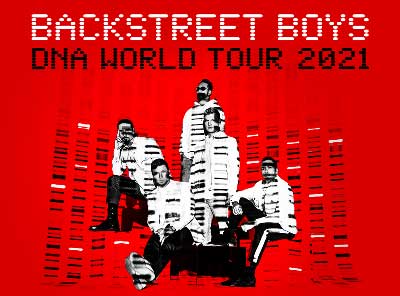 Produced by Live Nation, the extensive 45-date, three-month trek will see the group performing their impressive catalogue of award-winning hits in arenas and amphitheaters all over the U.S. and Canada. The forthcoming run is the second North American leg on their tour, which has become one of the group’s biggest arena tours in 18 years, thanks to the global success of their #1 and GRAMMY nominated new album “DNA.”

The Backstreet Boys have sold over 100 million records worldwide making them the best-selling boy band of all time, and one of the world’s best-selling music artists. They are the first group since Led Zeppelin to have their first ten albums reach the top 10 on the Billboard 200, and the only boy band to do so. The group received a star on the Hollywood Walk of Fame on April 22, 2013. The group also released their first documentary movie, titled Backstreet Boys: Show ‘Em What You’re Made Of in January 2015.